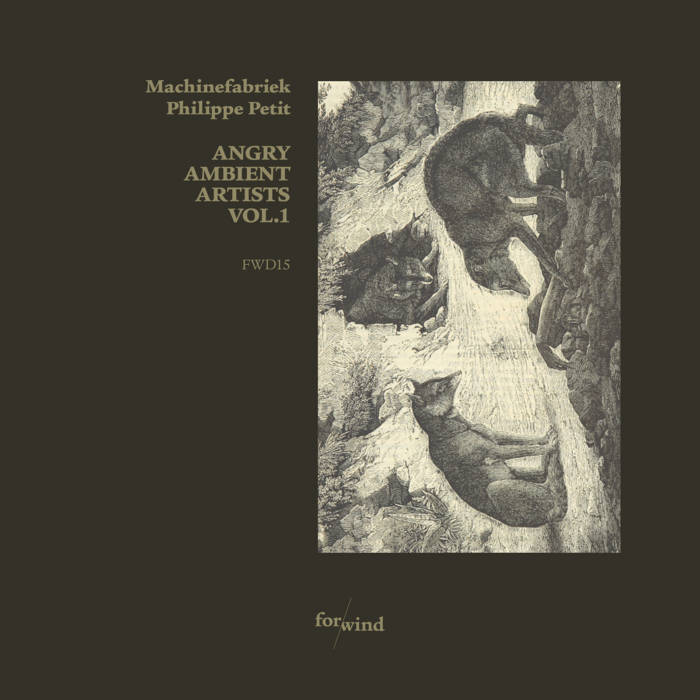 Angry Ambient Artists is a reaction to the label, akin to turning a rock and finding worms underneath...but “Graniet” is still accidentally gorgeous.' — Richard Allen - A Closer Listen

Following on from the hugely well received EP series by Tomonari Nozaki, Forwind begins a new audio adventure with the first instalment of our new cassette and digital series, ‘Angry Ambient Artists’. Vol.1 kicks off the series in uncompromising fashion featuring two intense outsider cuts to add some scares to those simmering summer nights...

Angry Ambient Artists started life as a tongue in cheek take on the contrast between the calm, blissful work of certain artists and their less than happy online personas. The potential for some Spinal Tap type humour is obvious, as it is with any musical scene that takes itself very seriously. The idea with the AAA series is to provide a platform to vent, have a poke at purist rules, play with genres, labels, categorisation and what you are 'allowed' or expected to do within these. AAA will also be turning outward and exploring the relationship between this studious genre and its ability to comment on the world it attempts to both listen to and reflect.

Machinefabriek opens up the series with ‘Graniet’. Rutger is probably most widely associated with a refined textural approach to electro- acoustics. So we asked him to do the nastiest track he had in him.

“The idea was to make something ‘brutal’, but with that, I also tried to make it beautiful and captivating simultaneously”.

Graniet is an exemplary meld of the distorted and dissonant with some artful and arresting sound design.

Philippe Petit has been making all manner of challenging and exciting music from the fringes for over a decade. Here he takes us down the next twist in the road after Rutger, with a raw composition using theremin, guitars and electronics.

‘In Corpus Voluptas’ sees the ‘musical travel agent’ head for the unhinged and macabre in an eerie and ominous piece that could just be the perfect soundtrack to someone’s world unraveling for good....

They won't be playing this tape in Ibiza this summer.